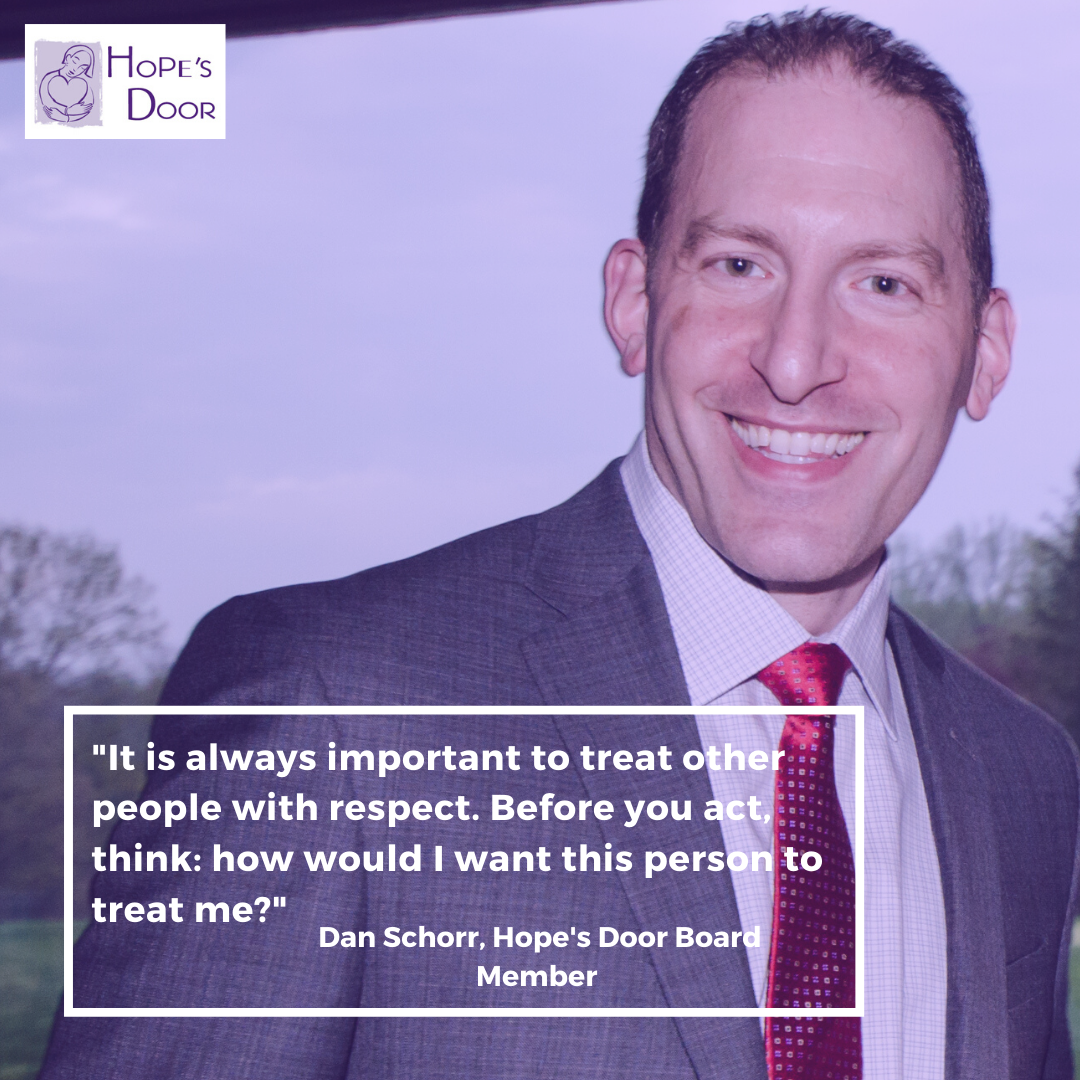 A role model is a person who through their values, attitudes and behaviors, serves as an example by influencing others. Role models take leadership on and advocate for issues that they strongly believe in. Dan Schorr, a fierce advocate for victims of domestic violence, exemplifies what it means to be a positive male role model.

Through his career as a Domestic Violence and Sex Crimes Prosecutor at the Westchester District Attorney’s Office, Dan became aware of Hope’s Door when his caseload included victims of domestic violence. Many of these individuals sought counseling, shelter, or economic empowerment assistance from Hope’s Door. Impressed with the work of the agency, and eager to continue to advocate for victims, Dan joined the Hope’s Door Board of Directors in 2014.

Dan is breaking boundaries by being an active male presence on the Hope’s Door predominantly female board. According to Kristen Gizzi, Hope’s Door Board President, “Having men on the Board of Directors is an invaluable tool. Men provide a unique and appreciated perspective. As a Board, we need to understand domestic violence from as many perspectives as possible in order to best meet the needs of our clientele.” Dan’s long history working in the field of domestic violence informs his contributions to the board. His legal perspective is integral to a board navigating the challenges of helping clients and advocating for legislative changes.

In addition to his legal expertise, Dan’s warmth and compassion for Hope’s Door staff, volunteers and clients make him a truly exceptional board member. Kristen Gizzi emphasized, “Dan is a compassionate and understated leader who provides support, knowledge and advice in such a caring manner. He is a fierce advocate for all causes that he believes in and does so in a professional and respectful way.”

When speaking with Dan, one can feel the sincerity of his words as he explains why anyone can be a role model. “Everyone who acts in a way to set a good example for others can, in fact, be a role model. It is critical to recognize that most often, people learn how to act by watching others.” Through experiences as a prosecutor, and later as an investigator with Ankura, Dan has direct proof that people learn how to treat others from watching and emulating those around them. “It is always important to treat other people with respect. Before you act, think: how would I want this person to treat me? Especially in the context of intimate relationships, one must always be conscious of the concepts of respect and consent.”

Dan’s passion for the mission of ending domestic violence keeps him motivated when he hits barriers in his work. “If your goal is to help other people, you can’t stop when you hit a roadblock. If our goals are meaningful, there is no option to give up when we face really big challenges.” Prosecuting and investigating domestic violence can be challenging because of victims not wanting to move forward in an investigation due to understandable reasons such as “sympathy for an abuser, financial challenges, threats from an abuser, misplaced guilt, and societal/community pressure,” Dan says.  That’s when Dan works even harder, and tries to not let challenges stop him from accomplishing great things in his work and in his advocacy roles.