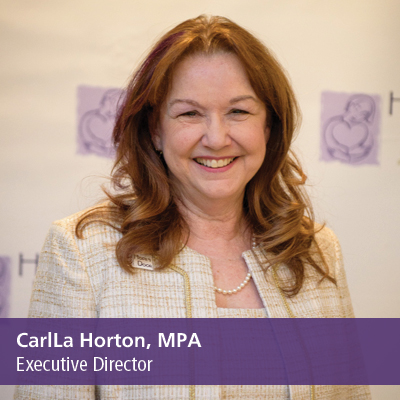 CarlLa Horton was appointed Executive Director of Hope’s Door in 1997, three years after receiving her graduate degree from the School of Business and Public Administration at Bernard Baruch College where she graduated first in her executive MPA class. Horton grew up in a family plagued by poverty and domestic violence and sees her work as an outgrowth of her social justice and feminist principles. During her tenure at Hope’s Door, the agency’s annual revenues grew from $560,000 to more than $2.3 million while the annual number of victims served grew from 250 to 765. Horton serves on the Advisory Committee to the New York State Senate Task Force on Domestic Violence, the Westchester County Domestic Violence Council, the Westchester Women’s Agenda, the Legislative Committee of the New York State Coalition Against Domestic Violence, and as a member of the New York Women’s Equality Coalition, among other activist work.